Justice Khanna is renowned for his courage and independence during the period that has been called the darkest hour of Indian democracy,
during the Indian Emergency (1975-1977) of Indira Gandhi.

- Reforms is a mechanism for electing worthy guardians, capable of building the nation and pulling the suffering people out of their miseries and settle them in a dignified way.

- Reforms shall also protect India’s wealth from getting auctioned as allurement for votes. The wealth of the nation is meant for development and creating means for living and avenues for employment. In absence of tangible development, India’s unemployment is rising exponentially.

Under the compelling conditions, time comes for the Judiciary to eliminate the wrongs of the past.

An untrammeled step now shall transform India
and take Judiciary to the ‘annals of history’!

Prerogative Powers of the Judiciary:

Mr. M. AnanthasayanamAyyangar, member of the Constituent Assembly of India, and later Speaker of the Lok Sabha, during a debate on the subject, described Article 32 (Right to Constitutional Remedies) thus: “The Supreme Court, according to me, is the supreme guardian of the citizen’s rights in any democracy. I would even go further and say that it is the soul of democracy. The elected Executive, which comes into being for the time-being, is apt to abuse its powers, and therefore the Supreme Court must be there, strong and untrammelled by the day-to-day passions which may bring a set of people into power and also throw them out in a very short time. If the fundamental rights of the individual are left to the tender mercies of the government of the day, they cannot be called fundamental rights at all,” and further that “these and other rights must be carefully watched and for this purpose the Supreme Court has been vested with the supreme ultimate, jurisdiction”. (Source: Discussion on 9 December, 1949 in the Constituent Assembly of India “on the scheme, object and enactment of Article 32 of the Constitution”).

-Most Constitutions of the world, some of them discussed briefly in Chapter 5 of my book reiterate the need for responsible and accountable system of governance to maintain fiduciary relationship with their people.

-In keeping with this, the Apex Court, in the case of Kesavananda Bharati v. State of Kerala (News clipping 4 of the book), pronounced that, “Parliament’s power to amend the Constitution did not extend to tampering with its basic structure or framework”.

The Indian Constitution and the role of Judiciary:

-The Judiciary interprets the Constitution as its final arbiter.

-It is the duty of the Judiciary as mandated by the Constitution, to be its watchdog, by calling for scrutiny of any act of the legislature or the executive, who otherwise, are free to enact or implement these, from overstepping bounds set for them by the Constitution.

-It acts like a guardian in protecting the fundamental rights of the people, as enshrined in the Constitution, from infringement by any organ of the state. It also balances the conflicting exercise of power between the centre and a state or among states, as assigned to them by the Constitution.

-While pronouncing decisions under its constitutional mandate, it is expected to remain unaffected by pulls and pressures exerted by other branches of the state, citizens or interest groups.

-And crucially, independence of the judiciary has been held to be a basic feature of the Constitution and which being inalienable, has come to mean - that which cannot be taken away from it by any act or amendment by the legislature or the executive.

Constitutional Incumbency of the Judiciary:

Judiciary is duty bound to ensure compliance of the objectives of India’s Constitution and provide justice and solace to its suffering people. Time comes for the mighty Judiciary to rise and save the nation from wretchedness and people from their perennial miseries.
Other than Judiciary, people of India have no savior Who they can fall back upon and cry for help.

I have expressed my worries to distinguished guardians of the nation; Justices, Senior Lawyers, Legislators and Executives at different times and at different places in the past few years, through my writings and seminars’. I have also been forwarding my books to a large section of our Judiciary and other eminent guardians for help.

Friends, an individual may not be able to bring about any change but the Judiciary can, with insurmountable powers as the custodian and implementer of the Constitution.

Our Judiciary is very strong and capable to bringing about the required changes as submitted to the learned Judiciary in the past few months.

It is incumbent duty of Judiciary irrespective of hurdles, pushes and pressures to uphold and implement the revered Constitution.

Nation and the people are always paramount and see no bounds.

Appeal to the Learned Judiciary:

As the third most powerful and concerned guardian, I appeal to the learned Judiciary, to please take a suo motu* cognizance of the dilapidating plight of the poor and their rising miseries and implement the vital electoral reforms as submitted, to enable the Indian voters elect sensitive and capable guardians, to establish responsible and accountable governments and fulfil the ‘basic objectives’ of our forgotten Constitution and address other predicaments that have besieged the nation.

*Moved by the pathetic plight of poverty-stricken children unable to go to school, in 2001 the benevolent Judiciary taking suo motu cognizance directed the governments to provide mid-day meals to the school children.

The causes of our failures are unmindful and destructive ‘Laws, Acts and Public Policies’

They are framed by the successive governments over the years, defying and abusing the basic laws, particularly Articles 13,32 & 37 (please refer the book).The ‘electoral reforms’ shall address such wrongful acts and set them right.
[News clipping 42A p.504 of india in chaos book].

Friends, I have tried my utmost to do what I could through my various books and seminars, to empower the nation economically and socially and address other grimmer becoming maladies and uplift the downtrodden populace to a happy and respectable tomorrow (p.283-84 of the book). I have also tried to provide road-maps and guidelines in my book as to how we can still surmount our predicaments and progress unbound with the unique concept of City Centres. (Part 3 of the book). Many eminent people have acknowledged the unique concept of C Centres.

"Quote" your concept of self-reliant ‘city centres’ by clubbing a few villages is interesting and certainly unique to the Indian model of governance” – Hon’ble Mr K.K. Venugopal, attorney General for India.

“The time comes for the learned Judiciary to uphold the reverence and sanctity of the Constitution by implementing the ‘Electoral reforms’ proposed by me to enable voters elect worthy guardians, capable of establishing worthy governments at the States and the Union. Governments so established will be capable to honour and fulfil the ‘basic objectives’ of the Constitution”. 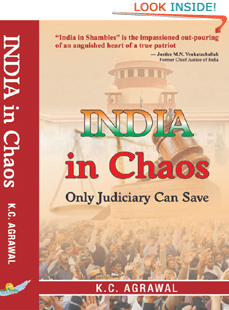 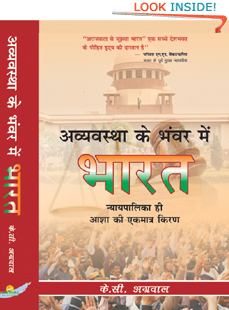 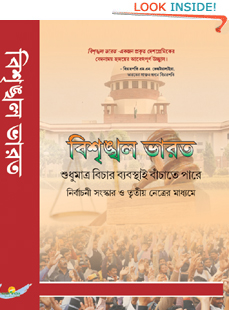