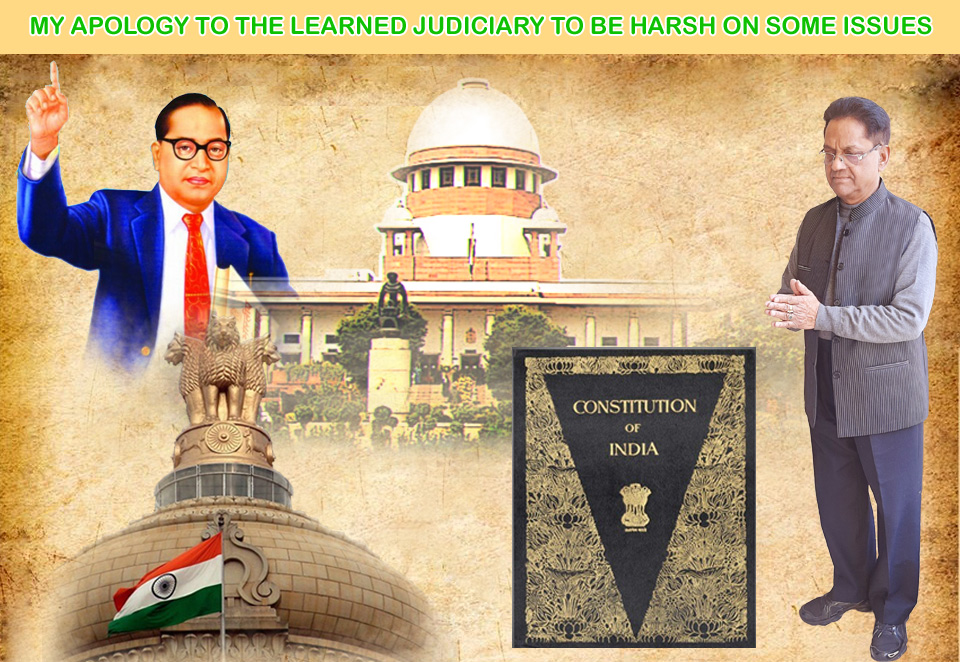 My Most Humble & Sincere Apologies to the Learned Judiciary

I bow down humbly to the learned Judiciary in reverence, to apologize for my audacities on some issues. The purpose is purely, to bring a logically correct or incorrect issue home, convincingly and strongly. I have an unflinching faith in our learned Judiciary and my last three books are testimonies to the same. Doting children may sometimes, bring some conspicuous wrongs to the knowledge of their parents to set them right in the larger good of the family. 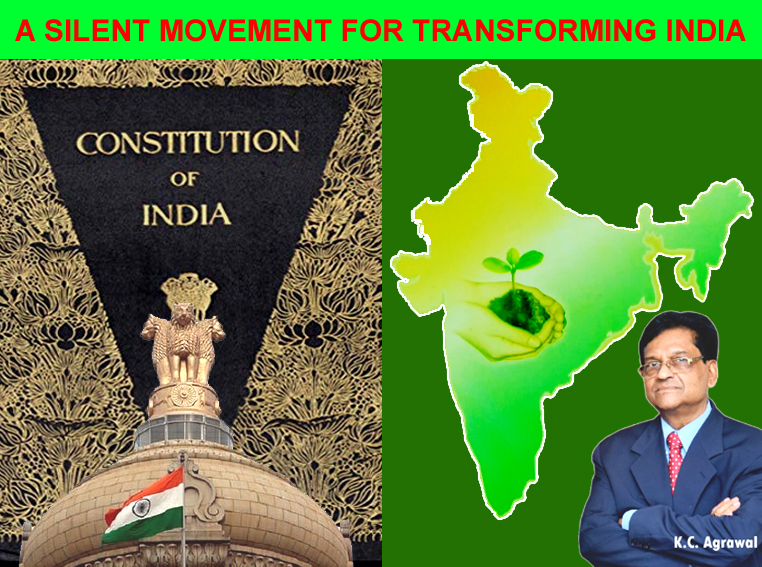 Author's Message To The Countrymen:

Having received little support from within or without, the present work can be considered a work against odds, accompanied largely by disapprovals and jeers. But what I have narrated is the grim reality of how India and its large debilitated and famished masses have been perpetually exploited and demeaned by our self seeking governing system in absence of adequate checks and balances by the learned Judiciary over the erring guardians (Legislature and Executive). This harsh reality one would be compelled to accept as one would proceed through the book

My endeavour through this book is to reach out this truth to the people of the land and our concerned guardians, to establish a responsible and accountable system of governance with the help of the learned Judiciary to first accomplish ‘liberty and dignity’ for our perennially famished and suffering masses and then transform the nation to unbounded progress and prosperity.

To build a prosperous nation and make our people happy and proud I have provided necessary roadmaps and guidelines in Part 3 of the book. Following these plans and adapting the concept of City Centres presented under Chapter 8.3, we shall not only provide liberty and dignity to our people naturally but also place our country amongst the most prosperous and powerful nations in the world in just 15-20 years for the present and the future generations.

Through my extensive research as presented, I have prayed the learned Judiciary, being the custodian of the Constitution and a third eye over the governing guardians (Legislature and Executive) for establishing responsible and accountable system of governances at the Union and the States and extending an opportunity to the people of India to realize their dreams.

The book is a diagnosis of a chronic patient. The investigations tell only about the ailing organs that need to be cured. The healthy organs have little mention! Data as old as 5-10 years are provided to co-relate performances of governments in different periods and bring home the fact that dilapidation has been a perennial feature of India due to poor governances.

For inquisitive readers the book will provide answers to most socio-economic and socio-legal problems.

It is 72 years since independence but none of the basic objective of the Constitution is fulfilled. Since Judiciary is the custodian, final arbiter and implementer of the Constitution, it is their turn to rise and set all wrongs right.

The book attempts at comprehensive diagnosis of India’s maladies and their total cure. It provides a unique opportunity to transform the nation with the concept of City Centers.

MY MISSION
The foremost is to establish responsible and accountable system of governancesat the Union and the States. Governments that are sensitive to human sufferings and capable of fulfilling the basic objectives of the Constitution in terms of ‘economic freedom’, ‘equal status and opportunity’, ‘liberty, dignity and fraternity’. It shall also stop the rapid decay of the nation and provide them long eluded and never fulfilled liberty, dignity and freedom from perpetual sufferings and woes of life.

To make it happen, I have prayed the learned Judiciary to carry out the essential electoral reforms as noted below to help establish responsible and accountable governments and accomplish the mission;

Essential Electoral Reforms
-Stop freebies: to help elect worthy guardians and save nation’s precious wealth on non-productive freebies and irrational promises to the voters during States’ & Union elections at the cost of development.

- Stop nagging and denouncing each other: because it germinates fratricidal instincts amongst the people of the land.

- Judiciary need to play a ‘third eye’; to uphold the dignity and reverence of our Constitution.

Electoral reforms shall open up all constrictions for unbounded progress of the nation. My submissions and a few follow up reminders are pending with the learned judiciary for reforms. Sure, Judiciarymust rise to the pressing demand of time and set the wrongs right. #http://indiainchaos.com/pil.html

“A fearless and independent judiciary is indispensable in any functioning democracy. Mr. Agrawal’s book is well researched and seeks the court’s intervention to prevent gross misuse of power by the executive to protect the fundamental rights of the indigent and neglected sections of our population. A must read for any person who does not want to see India in shambles”.

My idea of City Centres (CC’s) is to urbanize and empower the rural masses through a holistic development of the nation. It attempts to empower the masses naturally with opportunities created for self-determination and dignified living for all.

City Centres have been conceived to provide an opportunity to the village populace to live together and work together to become a force. The City Centres will also give them an opportunity to exchange ideas amongst themselves and improve their own thinking and working. To work in isolation does not inculcate community feeling. The concept behind these

Centres is the development of each village into a full-fledged city by clubbing a few villages together to attain self-reliance.

I propose to club about 500 to 600 villages together to make a population of about 10 lacsand settle them at one place. Now they can attract the secondary (industries) and tertiary (service) sectors as well. This should transform them, gradually shedding the stigma of a village or a villager (roadmaps provided in the book).

In the words of hon’ble, Mr K. K. Venugopal, Supreme Court of India, Attorney General for India;
“The book is a deep introspection into the maladies facing our country, and attempts to curate a solution. On a fundamental level, I would agree that the key is to establish a responsible and accountable system of governance at the state and union level. I have for long argued that the Supreme Court must act as a Constitutional Court as originally envisaged under the Constitution instead of acting as a mere court of appeal. This would ensure that matters of constitutional importance and interpretation are decided in a timely manner.”

“I also find that you have given much thought and painstakingly provided a framework for the country to bring in ‘a new dawn’. Your concept of self-reliant ‘city centres’ by clubbing a few villages together is interesting and certainly unique to the Indian model of governance”. -(http://indiainchaos.com/testimonials.html)

ROADMAPS & GUIDE-LINES
Part 3 of the book provides working details for establishing City Centers and transforming the nation. It also provides possible roadmaps and guide-lines how the same can indeed be established. If implemented prudently, these Centres canplace our country among the most prosperous and powerful nations in the world. My philosophies shall automatically “eradicate all kinds of class conflicts and categorization of people on lines of caste, creed and religion etc. So also banish all kinds of quotas and reservations in normal course”.

The book is a masterpiece research work for India’s prosperity. Eminent persons who have reviewed the book too have said so.
It is also suggested that the task of City Centres be implemented by the concerned and worthy industrial and business houses of India. 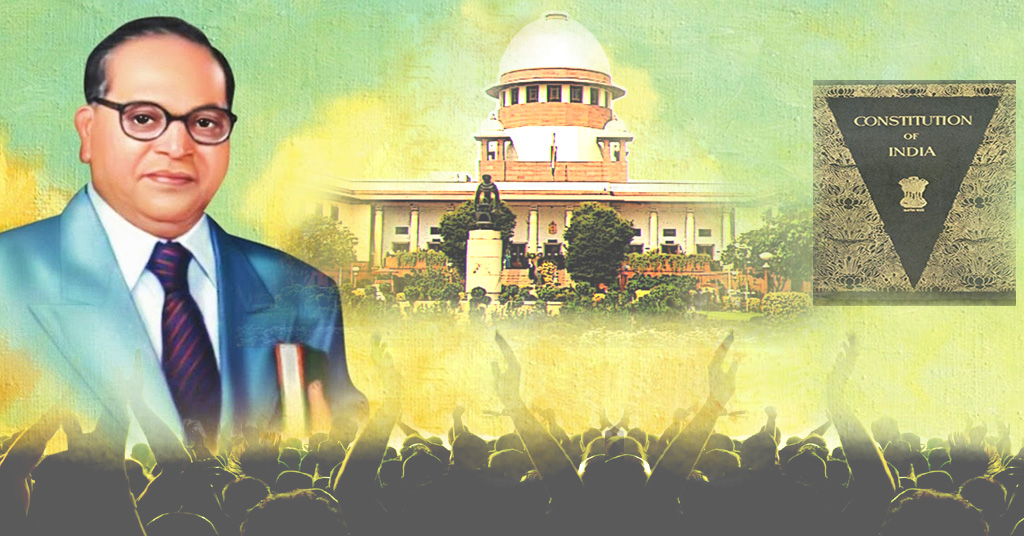